skip to main | skip to sidebar

Winter is always hard on my skin.   It’s like an alligator most of the time.  I try all kinds of lotions and creams to keep my skin from itching.

I was given the opportunity to review Udderly Smooth Body Cream.  I received a package of goodies from the company.   Foot  cream, hand cream and body cream were included.  I was really excited thinking my skin is going to be super smooth and hydrated. 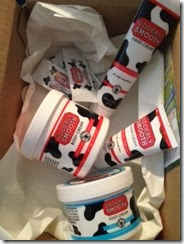 Udderly Smooth is a product which is made in the USA and has been for over 30 years.  It is good for cracked, dry skin.  You can use it as a moisturizer on your entire body including your face.

It was invented by a pharmacist and originally made for use on cows.

First I tried the tube of hand cream.  It felt pretty good.  The lotion is not greasy at all but it also doesn’t smell that great.   Personally I like scented lotions but I now a lot of people do not so this isn’t really that big of a deal.

The second thing I opened was the jar of body cream.  This is where things got a little weird.  Okay, a lot weird.  LOL

I thought there was mold in the jar. 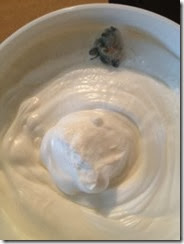 Mold doesn’t really bother me that much.  I was just going to scoop it out and try it.  Upon closer look I 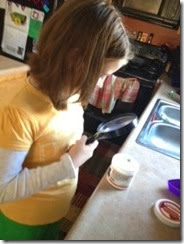 realized the mold had a tail.  Yep, a tail.  Obviously it wasn’t mold.  It did look like it had udders which was appropriate for the cream.   My daughter decided to have a closer look.   She showed me wings which were pretty cool.  I honestly have no idea what this was.  We poked it and my niece even touched it, lol.  She said it was squishy but firm.    I zoomed in on the picture and posted it on my facebook page to see what people thought it was without mentioning where I found it.  First response told me to clean out my refrigerator, lol.   The general consensus was that it is a tiny baby bat.  My thoughts are that when this was being made it landed in the jar before the lid was put on.  I’m sure this happens often but I have never been blessed enough to be on the receiving end of such a present.  Okay that was a joke.   Needless to say, I didn’t use this jar.  As time has passed more mold has has grown on the poor little thing and he has turned completely white.  It has turned into quite the science experiment.

The rest of the products worked well.  Bella rubbed my feet with the foot cream and it was heavenly.

If you would like a coupon you can visit the Udderly Smooth Facebook page $1 off any two  products!  I doubt you’ll get an animal friend in yours but you will get some really nice lotion.   You can buy it at Walmart and other major retailer stores.

You can read the rest of the reviews of my fellow friends on the  Mosaic Reviews page.

Thanks to Mosaics Reviews and Udderly Smooth for this review opportunity.  It was quite fun

Posted by Loving learning at Home at 8:47 PM

I would like to let you know that this blog contains reviews done by me in exchange for products from certain companies. I have not received any other compensation for the honest reviews that I post. I will never promise a favorable review. If I don't like the product, I will honestly tell you why.

I would like to disclose the following existing relationships with affiliates: CurrClick, AdSense. I am an affiliate with the aforementioned companies and may receive compensation if a reader clicks through a link on my blog and makes a purchase.

If you have any questions about this, please e-mail me at loriboling@gmail.com.,\

Check out our new site!

Loving learning at Home
Hi. I'm Lori. I have a son who is 15 years old and a daughter who is 10. We are having a great time learning at home. Things I enjoy include reading, scrapbooking and spending time with my family. I am just one person trying to do what is best for my family and God.

You're gonna want this button on your blog

Train up a child in the way he should go; and when he is old, he will not depart from it. Proverbs 22:6

I can do all things through Christ who gives me strength.

Join me on Blog Frog 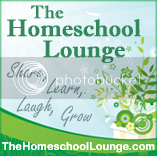 Let me help you find what you're looking for

A new way to gain followers!